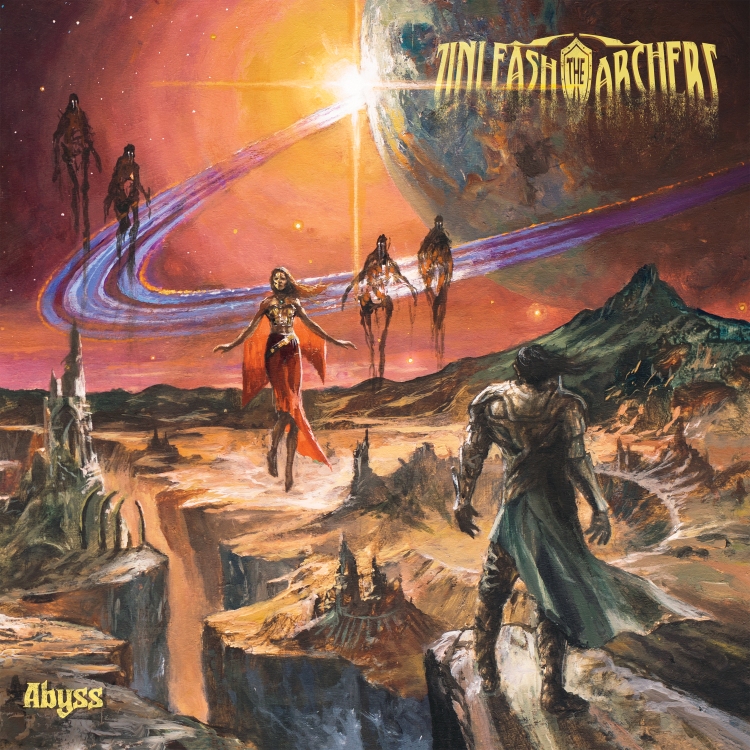 Even with a moniker like Man Of Much Metal, I cannot possibly be across all bands, all genres and all styles of metal all of the time. Sadly, I’m not omnipotent, as hard as I might try. It means that there are some bands that will, disgracefully, fly under my radar, when they should be much more central within my consciousness. One of these bands is Unleash The Archers.

I have never before checked them out, or really been aware of their existence if I’m honest. And that’s almost impossible to understand given the fact that this Canadian quartet have been around since 2007, have released four albums in that time, and have garnered a truck load of positive acclaim from press and the metal community in general. These guys, in power metal terms, for that is loosely what they play, are becoming something of a force to be reckoned with it seems. OK, they are not up there with Metallica and Iron Maiden quite yet, but they are gaining traction all over the place. And, based on the output of ‘Abyss’, their fifth full-length release, it is easy to understand why.

Given that I have not heard a note of previous releases, something I plan on rectifying as soon as possible, I will not be comparing and contrasting the output on ‘Abyss’ with their back catalogue. Instead, I want to delve into ‘Abyss’ with new ears and explain why it is that I am kicking myself – hard – for not discovering Unleash The Archers sooner.

First up, it is impossible to ignore the impressive pipes of vocalist Brittney Slayes. I have heard her before, as a guest on a previous Helion Prime record but nothing could prepare me for the full impact of her voice within the context of her own band and a full album. Slayes (real name Brittney Hayes) has everything, as ‘Abyss’ demonstrates. She can belt out the high notes, she can deliver something much lower and sinister, whilst she also possesses real charisma, able to portray a myriad of emotions within her performances. And do I also hear a few growls here and there? Brittney, ladies and gents, is the real deal. But you knew that already, didn’t you?

However, using Nightwish as a personal example, you can have an amazing vocalist but still fall short if the music isn’t up to much. But again, in the case of Unleash The Archers, they excel in this respect too, with track after track delivered with style, panache, variety, confidence and a tightness that is to be commended. I’m not saying that every single track is a winner here, as such feats are rare. But trust me when I say that there is almost no filler to be heard within the ten tracks and 58 minutes of music on offer within ‘Abyss’.

Having done my research, I can confirm that the line-up has been stable for six years or more, meaning that original members Brittney Slayes and drummer Scott Buchanan are once again flanked by guitarists Grant Truesdell and Andrew Kingsley, who both offer some supporting vocals when called upon, whilst Kingsley also adds synths to his list of roles within the band. And it is this element, I’m led to believe, that’s a new ingredient to the Unleash The Archers sound. But, coming to the band anew, all I can say is that it is a hugely welcome ingredient as far as I’m concerned. 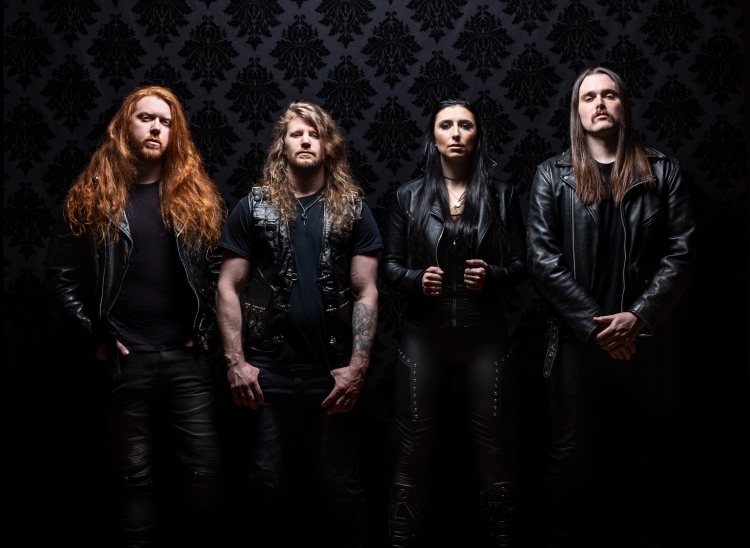 Labelled as a power metal band, I must admit to being surprised by the amount of variety to be heard on ‘Abyss’ too. This isn’t all 100 mile per hour galloping, and high-pitched wailing, although there is plenty of this to be heard; there is much more to the band’s bow than this alone.

The half intro, half fully-fledged song that’s ‘Waking Dream’ is, above all else, a truly rousing affair. It starts quietly with gentle and serene clean guitar notes before exploding into life with a delicious guitar tone and a rhythm section full of power and menace. And it immediately puts the spotlight on those glorious vocals, which start off delicately, tentatively only to transition into full-on attack mode, full of presence and charisma.

The ‘intro’ piece then seamlessly segues into the title track (or it would do if I wasn’t listening via a godforsaken stream that needs a few tension-ruining seconds to load the next song) Immediately, the sound of bold synths duet with bright and breezy guitar-driven melodies as the song opens with a genuinely epic-sounding intro. However, it is soon replaced by fast, arresting riffs, impossibly high wailing vocals and more modern-sounding bold synths. The song skips along as if towering one hundred feet tall, confidence oozing from every pore. The melodies that emerge in the bridge and chorus are absolutely irresistible, with layers upon layers of delicious sounds assaulting the ears. Speaking of layers, Slayes’ vocals are equally layered to create some wonderful harmonies. As the song develops, lightning fast fretwork from the six-strings take over, adding a sense of barely contained enthusiasm and effervescence. The closing crescendo is something that has to be heard to be believed, taken to another level by the sheer power of Slayes’ voice.

Up next is ‘Through Stars’ which changes the dynamic rather considerably. If anything the synths are even more important and pronounced. The quasi-ballad has a definite 80s feel to it, channelling the very best that the melodic hard rock genre has to offer. And yet it still sounds fresh and modern, exuding a swagger and panache that cannot be ignored, not to mention yet more incredible hooks and earworms, especially within the magical chorus.

I don’t want to make this into a track-by-track rundown but the fourth composition cannot be ignored, principally because it further underlines my comments about the sheer variety on offer on ‘Abyss’. I wasn’t expecting such a gentle, angelic beginning to explode into black metal-meets-tech death territory complete with warp speed sweeps and near blastbeats. I hear a touch of the Devin Townsend within the song, especially when the tumult ceases to be replaced by something strangely upbeat and quirky. There’s a definite progressive tinge to proceedings but, in keeping with what has gone before, the chorus is once again a monstrous affair that features almost too much to home in on one element only.

‘Return To Me’ is best described as power metal meets melodic death metal thanks to some huge, chunky riffs, growls, snarls, a fast pace and gloriously anthemic chorus melodies. ‘Soulbound’ and ‘Faster Than Light’ continue the breathless theme set by their predecessor but, if anything, they’re both even more memorable, featuring some excellent drumming and inspired guitar work all round as warp speed glory is nearly reached on the aptly-named latter track.

As the album enters the final stretch, Unleash The Archers then…errr…unleash some of their most lengthy compositions with ‘The Wind That Shapes The Land’ and closer ‘Afterlife’. The former offers a much-needed reprieve from the full-on bombardment of the previous tracks and gives Brittney Slayes the opportunity to delve into her considerable box of tricks, delivering some more sensitive vocals before the song finally achieves galloping speed and we hear some savage higher-pitched, raspy vocals to counterpoint the ebb and flow that predominantly allows Slayes’ full range to be let loose. ‘Afterlife’ goes all cinematic and expansive on us, with a hint of folk via the pipes within the lengthy intro, before more ‘normal’ service is resumed as the track develops.

In between is the intriguing ‘Carry The Flame’ that features something approaching a duet with Andrew Kingsley. It is a personal favourite thanks to a reintroduction of the 80s swagger seen earlier in the record. I’m a sucker for synth-laden melodic hard rock/metal, so this song pushes all the right buttons as far as I’m concerned, including my favourite solo on ‘Abyss’.

Now you know why I am kicking myself hard for not checking this band out sooner. I’ll say it: based on the output of the absolutely breathtaking ‘Abyss’, my error of not discovering Unleash The Archers sooner is as close to heavy metal treason as it is possible to get. I don’t really know how else to sum up this record, except to say ‘woah!’ Modern, melodic, heavy, varied, tight, confident, and sublime – ‘Abyss’ has thrown the cat amongst the pigeons and made itself a strong contender for a spot in my end-of-year best-of list. But then you all knew that this would be good didn’t you? A little heads-up might have been nice, dear readers!